Who voted for Santorum and Romney 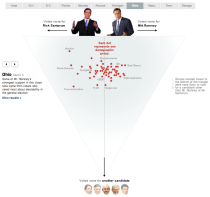 As a complement to Shan Carter’s exit poll dancing boxes, The New York Times provides another view with an interactive triangular scatterplot.

In the dancing boxes, you can see how states are inclined to vote based on exit poll groups. In the scatterplot, on the other hand, the groups within each state are plotted, with an added dimension towards candidates other than Santorum and Romney. The navigation bar on top and clicker on the left let you see tendencies of each state.

Like the dancing boxes, the transitions make the chart. As you browse by state or by category, you’re able to see differences between groups when shapes move across the screen.

In somewhat related news, The New York Times graphics department is looking for summer interns. Send your interest to Steve Duenes (duenes [at] nytimes [dot] com) and Amanda Cox (coxa [at] nytimes [dot] com). I interned there a few years ago, so I can tell you first-hand that you’ll learn a lot — probably more than in any class you’ve taken — while working with the best in the business.