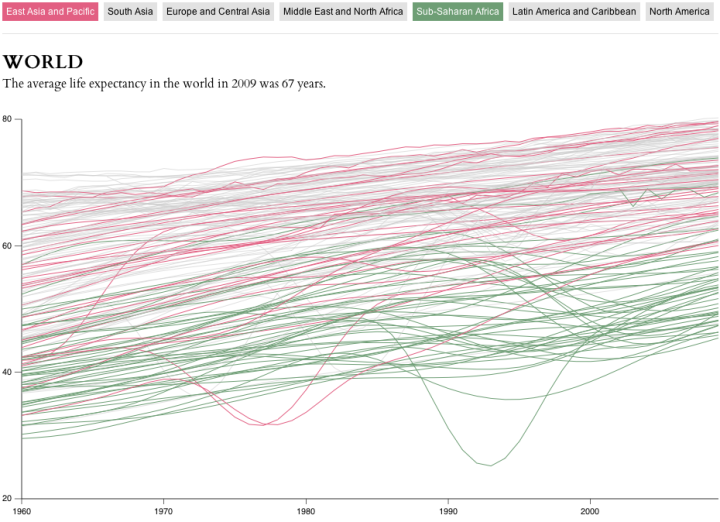 I played around with D3 some more. This time I used data from The World Bank to look at life expectancy over time and by country. The data goes back to 1960 and up to the most current estimates for 2009. Each line represents a country, and you can see a few more details by rolling over each one.

More usefully, you can select regions, as defined by The World Bank, and see how groups of countries have changed or compare with other regions. For example, the shot above shows East Asia and Pacific in pink and Sub-Saharan Africa in green.

The major dips for some of the countries jumped out at me immediately. A few quick searches suggest that they coincide with war, such as the Bangladesh Liberation War in the 1970s, the Iran-Iraq War in the 1980s, and the Rwanda Civil War in the 1990s. There’s also a smaller dip for Iraq starting in early 2000.

Some countries, such as Seychelles, didn’t have data that went back to 1960. In this case, the line starts where annual data became available.

There are a few interactions that I’d add to make the graphic more complete, but don’t have time to get to right now. For example, as I clicked around, I wanted to keep a selected country highlighted to see how it compared to others. It’d be informative to point out periods of war on the graphic, too.

See the full interactive here, and as usual, comments are welcome.