When crime happens in major cities 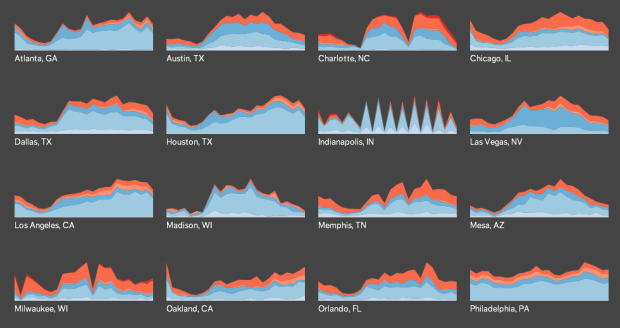 Does more crime happen during the late hours of the night or in the middle of the afternoon? Trulia Insights uses small multiples to look at crime by hour in major cities, or rather, when it is reported, according to SpotCrime. There appears to be a dip during the 3 a.m. to 7 a.m. hours for all crime types, across all cities. Well, except for Indianapolis, which seems to report incidents with rounded off hours.

It’s important to remember though that these are report times and not actually when incidents occurred, so maybe what we’re seeing are when most people are asleep and awake. For example, when I was a kid, my house was robbed while we were sleeping, but we didn’t notice the opened window and missing purses until we got up. So maybe a better title would be “when police departments should have more staff working.”

In any case, don’t go walking around waving your Benjamins in the air at 4 in the morning in a dark alley because you saw dips in some graphs.