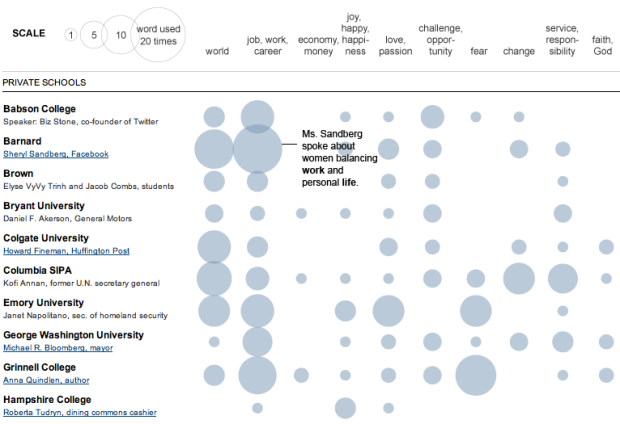 If you’ve visited YouTube in the past couple of weeks, you’ve probably noticed the links to this year’s commencement speeches by all the famous people (Conan O’Brien’s at Dartmouth has been my favorite so far). Most speakers seem to base a lot on their own experiences, but they tend to revolve around the same themes like meeting challenges, don’t fear failure, and love what you do. Of course, there’s still plenty of variance across speeches though.

Jonathan Corum for The New York Times maps out word usage in 40 commencement speeches. The larger the bubble, the more a word was used. Tom Hanks, for example talked about fear and American ideals, and former President Bill Clinton talked about interconnecting the world. Dining commons cashier Robert Tudryn on the other hand had some other topics to talk about.

Personally, I don’t remember a single word from the commencement speech given at my graduation. I can’t even remember who it was. Some dude. Who spoke at your graduation?