Reactions to the death of a terrorist 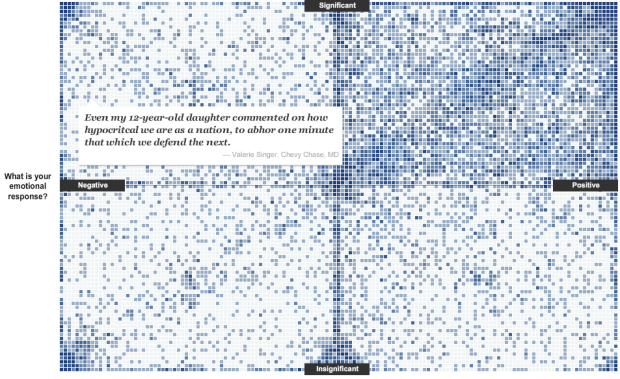 On the announcement of Osama Bin Laden’s death, there was a mixed reaction across the country. Some celebrated, whereas others had mixed feelings. Jon Huang and Aron Pilhofer for The New York Times, asked readers how they felt and to mark their thoughts on the positivity vs. significance grid.

Comments on the far right are from those who thought the event was significant and had a positive emotional response. The bottom left are those who felt the opposite.

As you can see, the majority of comments went to the top right quadrant, along with some clustering in the corners of the other quadrants. So either you felt a positive emotional reaction and thought the event was significant, or your feelings were more extreme.

[The New York Times via @blprnt]