History of detainees at Guantánamo 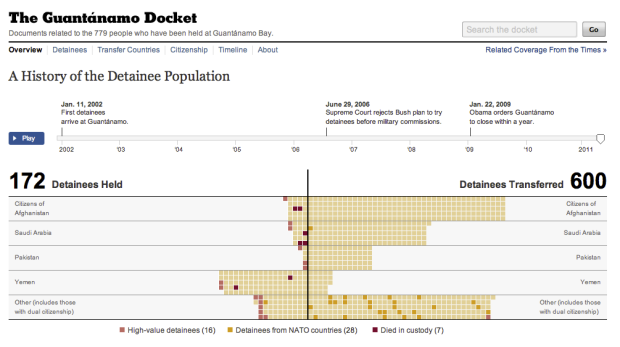 On January 11, 2002 the first detainees arrived at Guantánamo. On January 22, 2009, President Obama ordered Guantánamo to close in a year. The Guantánamo Docket is an interactive database compiled by The New York Times and NPR that shows the detainment and transfer of 792 men.

The Times and NPR have reviewed thousands of pages of government documents released in recent years, as well as court records and news media reports from around the world.

Visually explore changes over the past few years. Each row represents country of citizenship, with detainees on the left and transfers on the right. As you can see, according to a variety of documents, there are currently 172 detained and 600 who have been transferred.