The sold out O’Reilly Strata conference was a success down in Santa Clara, California, with the next one already scheduled for 2011 in New York. There were lots of interesting talks and lots of interesting people to talk to. I was only there for one day and didn’t nearly get to meet everyone I wanted to, but it was great seeing so many people who are excited about data packed into one place. 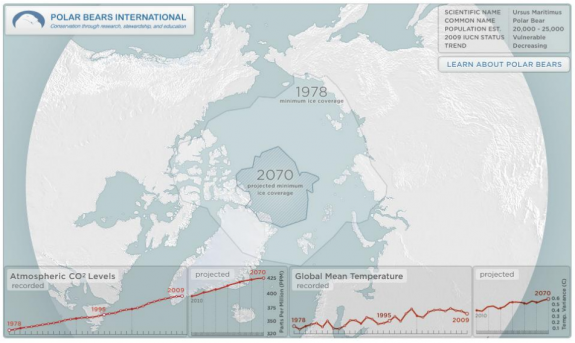 While there was a visualization-esque category of talks, I felt like it wasn’t particularly strong on the day I attended. More user interface than viz and not so organized on others. However, I heard there were some impressive showings on the last day. Also check out Kim Rees’ slidedeck on the “visual economy.”

This is what I expected at a “big data” conference though, so not a huge deal. I mean, my roots are still stat, so it’s always entertaining to listen to people talk about how they’re making use of data, whether it be visualization or analysis. And for the most part, speakers were good about not getting into the nitty gritty details and keeping an eye on big picture.

Here’s Hilary Mason (below) giving her short keynote on what data tells us. The big picture is important as are the individual data points. With that in mind, what new opportunities are out there? Hint: there are a lot.

Here’s Mark Madsen on the Mythology of Big Data:

Werner Vogels from Amazon on Data Without Limits:

Check out the rest of the keynotes and a series of interviews over on YouTube. Jan Willem Tulp also has a fine roundup of the three-day event, as does Ted Leung.