Why the other lines always seem to move faster than yours 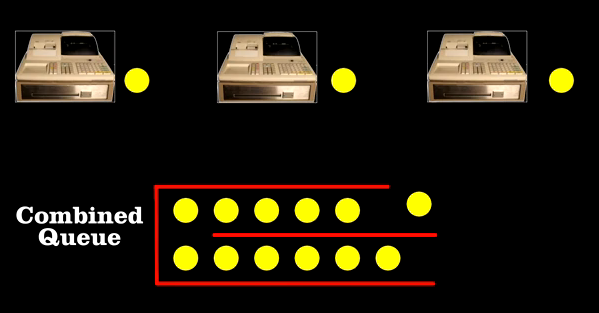 Why does it almost always seem like you’re in the slow line at the grocery store or in the driving lane with the most cars on the freeway? Bill “Engineer Guy” Hammack explains in terms of queuing theory in the video below:

Bill reveals how “queueing theory” – developed by engineers to route phone calls – can be used to find the most efficient arrangement of cashiers and check out lines. He reports on the work of Agner Erlang, a Danish engineer who, at the opening of the 20th century, helped the Copenhagen Telephone Company provide the best level of service at the lowest price.

Erlang found out how many telephone lines the company needed, given the average number of calls per hour. Similarly, you can figure out how many checkout lines you need, given the average number of customers. It turns out the best arrangement is to have a single line, and the next customer goes to the next available register. There’s less chance of blockage from a single delay.

But people don’t like doing that apparently, and so assuming random selection, ending up in the slow line comes down to simple probability.

Another way to think about this problem is in terms of time. You wait when you’re in a slow line. You move when you’re in a fast line. So the longer amounts of time spent waiting feel more significant (even though it might be a single pick) than when you made the fast picks.