What New Yorkers complain about 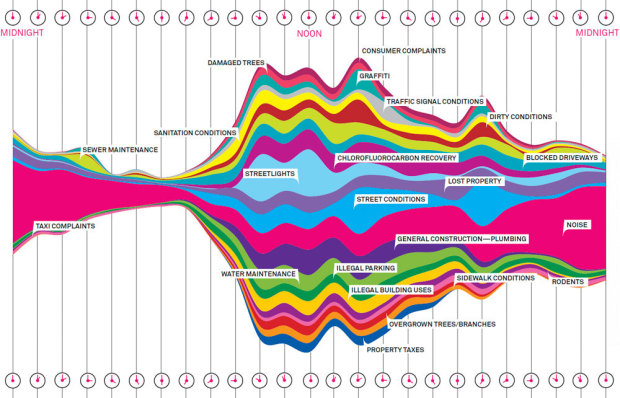 Wired, in collaboration with Pitch Interactive, has a look at complaints called in over the 311 line in New York. The above is a sample from a week in September, and complaints are plotted by time of day, via the streamgraph approach. As you might expect, there’s a greater proportion of noise complaints at night and early morning, along with lots of road-related complaints during the day.

The most interesting part of the story though is how the government is actually making use of this data:

Each complaint is logged, tagged, and mapped to make it available for subsequent analysis. In some cases, 311 simply helps New York respond more intelligently to needs that were obvious to begin with. Holidays, for example, spark reliable surges in call volume, with questions about government closings and parking regulations. On snow days, call volume spikes precipitously, which 311 anticipates with recorded messages about school closings and parking rules.

But the service also helps city leaders detect patterns that might otherwise have escaped notice. After the first survey of 311 complaints ranked excessive noise as the number one source of irritation among residents, the Bloomberg administration instituted a series of noise-abatement programs, going after the offenders whom callers complained about most often (that means you, Mister Softee).

We seem to always associate government data as a means to holding politicians accountable for their actions—as a way for us to point fingers at the government. And this is true and important. But data (and resulting apps) can also be used by the government to keep track of what’s important to the people they’re trying to help.