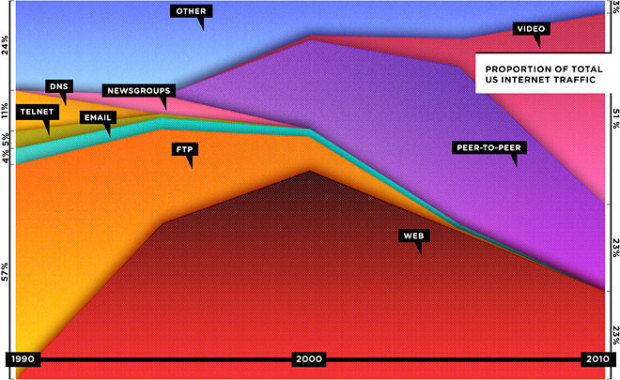 Wired has declared that the Web is dead in their September cover story, and they lead off with this stacked area chart showing the decline of browser-based consumption. Each layer represents a way to consume media via the Internet. Instead of the browser, the majority of US traffic, as estimated by Cisco, has shifted towards peer-to-peer, video, and tiny apps over browsers. Data accuracy questions aside, let’s not forget though that the number of total users is still growing, and that smaller portion using the Web is still billions of people.

My main concern is that the graphic only goes up to 2005. That’s ages ago by Internet time. What do the numbers look like now?

Update: Graphic now has correct timespan labels. So now it’s back to the debate of relative vs absolute values. [thx, Joanna]

Update again: What if the article had been about the growth in the number of ways we can interact with online media? Would we see this distribution differently?