The Boom of Big Infographics

Big information graphics have been around for a long time. They’ve come in the form of maps, visualization, art, signs, etc. That was all on paper though. In the past couple of years, humongous, gigantic, and often really long infographics have found their way onto the computer screen, through blogs and news sites. Some are great. Some really suck. The volume is booming for both.

Let’s take a look at when this all got started, where the trend is headed, and how much we should really read into these things.

Like I said, information graphics have been around for centuries. Flip through Cartographies of Time for examples, or think back to the first time you saw a pictogram on a street sign. We’re talking about big, modern infographics though. For that, we turn to Google. Here are the timelined search results:

We’re getting somewhere, but Google’s search results aren’t quite what we’re after. Search results are dated by the content’s place in time, not by when a graphic was actually made. Search results don’t necessarily point to an actual infographic either. It might just be an explanation or a quote about the term. 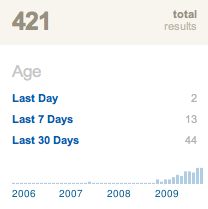 Instead we direct our attention to Digg – where a lot of infographics go to die or live on to go viral.

A search for infographics that have hit the front page of Digg shows a surge in 2009.

Three years before, in 2006, was the first submission to go popular (on August 21), that contained ‘infographic’ in the URL, title, or description. It got 3,226 diggs and evoked 153 comments. To this day, I still find this graphic on the ubiquity of Starbucks and McDonald’s in my suggestions box: 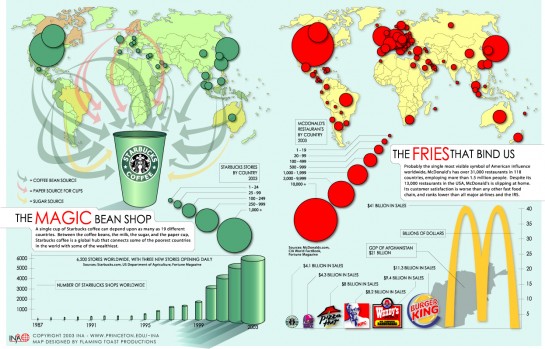 It is indeed big. Even at today’s resolution standards, it almost fills my entire screen.

[Funny fact: the above, along with a series of others, were created by Jonathan Harris (under the guise of now defunct Flaming Toast), who you might know from We Feel Fine and I Want You to Want Me. We all have to start somewhere, right?]

There were four times as many infographics that hit the front page in 2007 as there were in 2006. A whole four of them. The most popular that year, by Wade Meredith, was a timeline that explained what happens to your body when you quit smoking.

The middle portion is Meredith’s own experience with quitting the death stick, and lines point to important stages during the quitting process. It got 2,587 diggs and 169 comments. The actual blog post took on a life of its own, with over 4,000 comments.

Good magazine also started publishing their weekly transparencies around this time. They pushed their first one out in December 2006, at least the first one that’s available online. Issue 002 (I can’t find 001) showed a bunch of bubble slash pie charts that show where major charity foundations donate their money to. 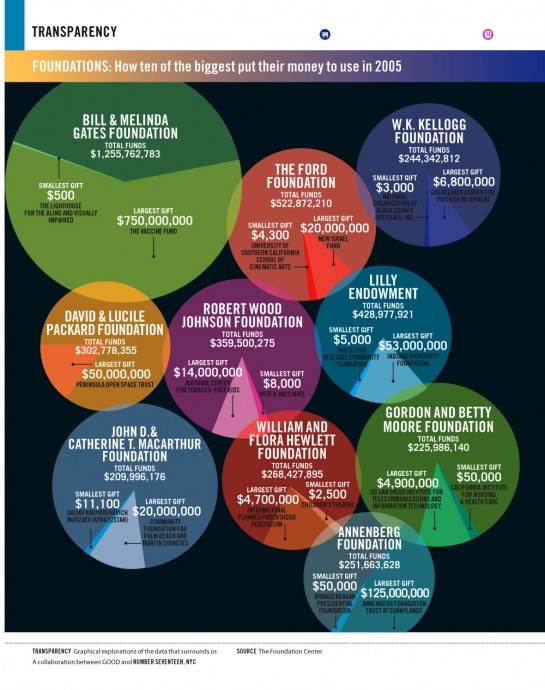 It took six tries for one of the transparencies, a story of female world leaders, to make Digg’s front page in August 2007:

From what I can tell, Wired also started putting out infoporn around this time too, although not as regularly as Good. This is the first one I found, which shows how much people know about the world:

In 2008, again, there were only four infographics that made the front page, the most popular being this one from The Onion, which earned 1,218 diggs: 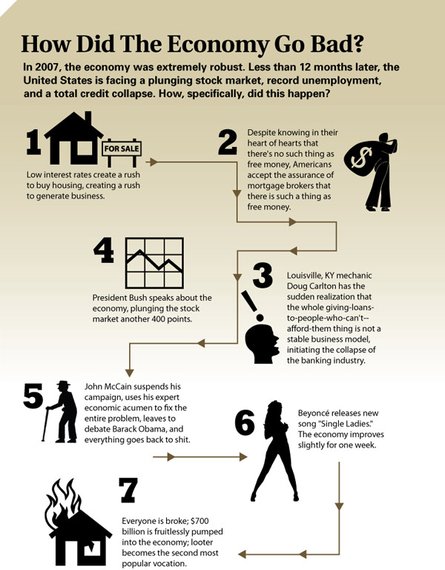 Of course during these early years, there were plenty of other people making graphics that weren’t popularized on Digg. 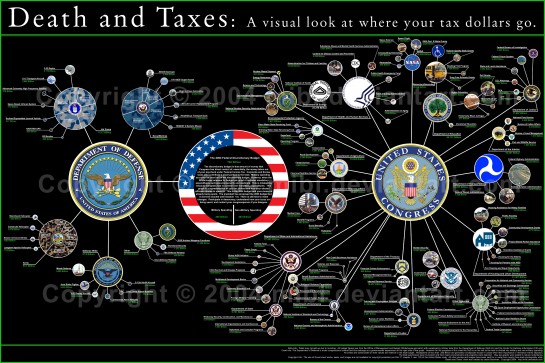 This is important in the timeline. As Jason Lankow of Column Five Media (who themselves have the infographic create-and-promote program down to a science) puts it, Jess is “the original master of the blogroll infographic.”

This is when it gets interesting. Up to this point, we’ve seen a lot of big graphics, but the ones we’re used to seeing nowadays are the really long infographics that fit neatly into the content column of a blog. Well, I guess you can call 2008 the birth of the long infographic.

In late 2008, Jess, with Column Five, created a series on beer. It’s not a long one quite yet though. It’s eight graphics designed around a single theme: 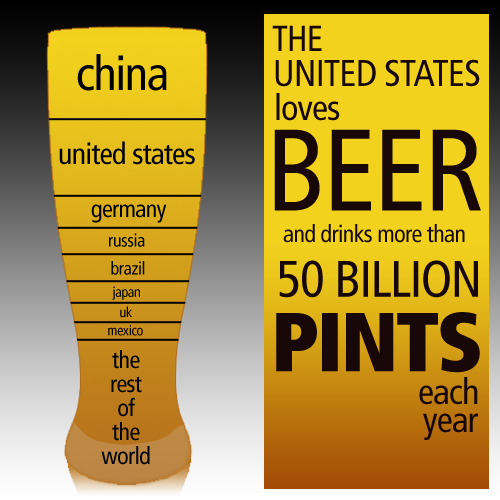 Soon after, the same group published a long infographic for Mint that looked at United States debt as an individual household. 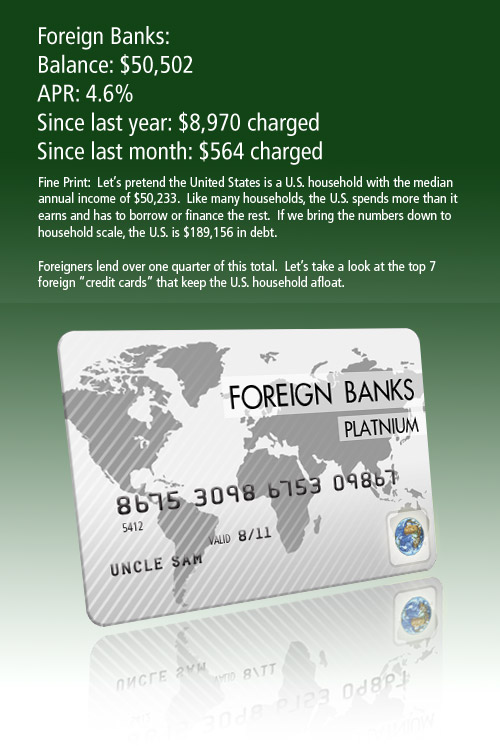 And so it began…

While in 2006 through 2008, there was never more than four infographics that went popular, there were 225 just last year. In January 2009 there were eight. In December 2009, there were 34. Now in 2010, there are just under 50 that go popular per month. Go to Digg at any time of day, and there will most likely be at least one submission labeled as “infographic.” At this rate, there will probably be over three times as many big infographics that go popular this year than in 2009.

These are the top five most dugg infographics this year:

Notice the first two don’t link to the original sources. The second is an op-chart from The New York Times, and I can’t even find where the first one came from. The third, which links to Good, is actually from the Physicians Committee for Responsible Medicine (I think). The last two are more comics than anything else. 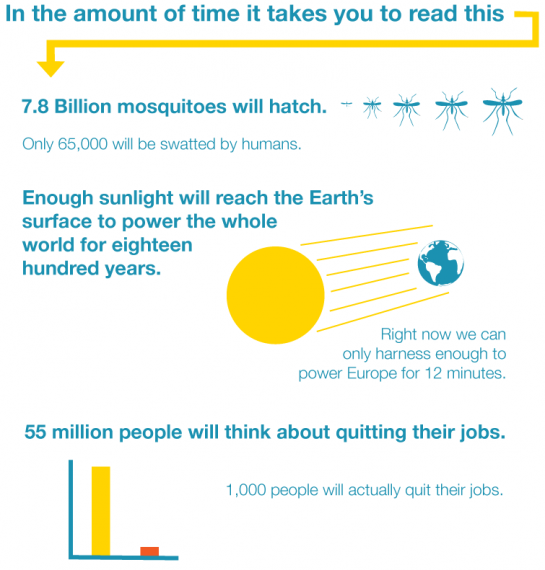 This should tell you a couple of things right off the bat. First, a lot of digg users don’t care about where graphics come from. They’ll upload it to imgur, and just submit to digg. Attribution is really an issue for a different post (and a different blog) though.

More importantly, it demonstrates why people go to digg and other social media sites. They’re not looking for something to make them ponder their existence or explore the edges of the universe. They’re looking for – and digg users, correct me if I’m wrong – humor and entertainment. It’s a general audience that doesn’t care a whole lot about data. They just want to see pretty pictures, and if those pictures happen to show a little bit of information, then all the better. Oftentimes, it just has to be amusing. No thought required. 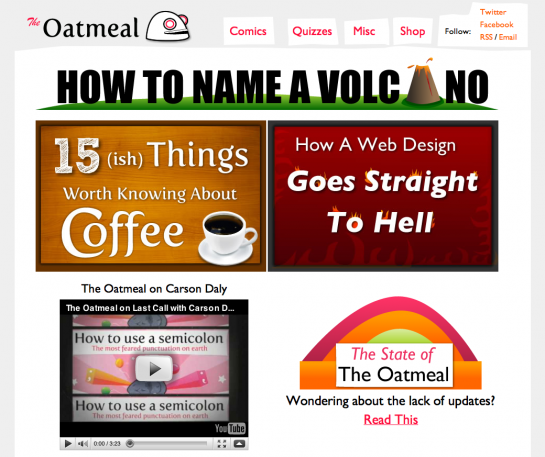 So while we like to poke fun sometimes, these big infographics achieve their goal in driving traffic to the sites they appear on. Let’s not forget that the only reason big infographics continue to thrive is because millions of people like them. I can tell you firsthand that whenever I post a big infographic, whether my own or someone else’s, there is almost always more views than usual.

Of course, a lot of garbage sites have sprung up as result that pitch credit cards and sell insurance, but that’s nothing new. Scammers have been around since the beginning of the Web. We’ve managed to gain a sense of what’s fake and what’s real. It shouldn’t be any different with these graphics.

This isn’t to say that all the big infographics are perfect or that it’s okay to put out crappy work. There’s a lot of the latter. People are simply learning how to analyze and display data, and on the flip side, consumers are growing more accustomed to looking at numbers. Remember when the Web was filled with blinking buttons, brightly colored backgrounds, and Comic Sans? Just think of this as the prepubescent stages of infographics on the Web.

As consumers of infographics, you should be critical of them and take everything with a grain of salt. There are going to be mistakes along the way. Don’t be so quick to call something a complete failure though, and if an infographic is completely off, offer something more useful than ‘fail.’ Nothing is going to improve with that type of comment.

As designers, always strive to improve your skills and do more with your graphics than show the numbers straight up. Look for patterns and relationships. Don’t force anything, but keep an eye out. Most importantly, don’t just create for linkbait’s sake. It shows in the work if you do, and many people are already fed up with it.

As long as both groups keep up with their ends of the bargain, the evolution of these big infographics could easily be really good. In the meantime, I’ll do my best as your filter, only pointing you towards the high quality stuff and some of the bad from time to time, for learning’s sake.