Tax brackets over the past century 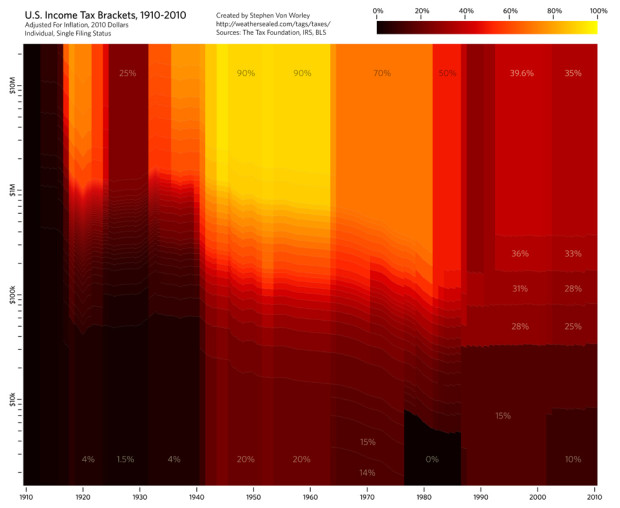 Stephen Von Worley’s Weather Sealed is one of my new favorites. In his most recent graphic, income tax brackets for individuals are displayed.

The colors indicate the marginal tax rate: black for low, red in the middle, and yellow for high. The horizontal axis is the tax year, and the vertical represents taxable income, log-scale, normalized to 2010 dollars with the Bureau Of Labor Statistics’ monthly CPI-U figures. The bracket data comes from The Tax Foundation and the IRS, and the effects of Social Security, capital gains, AMT, and other tax varieties are not included.

Through most of the century, brackets were much closer to a continuous scale. There was a big shift in thought though in the 1980s, when Ronald Reagan was elected president. The brackets became much more distinct. The idea has more or less stuck over the past two decades.

Of course what sticks out the most is the 90% income tax during the mid-1900s. Earn $10 million. Give the man $9 million of it. That seems sort of, uh, wrong. The range between lowest and highest is also really big at 70 percentage points. It’s only a small difference of 15 percentage points nowadays. Much better.