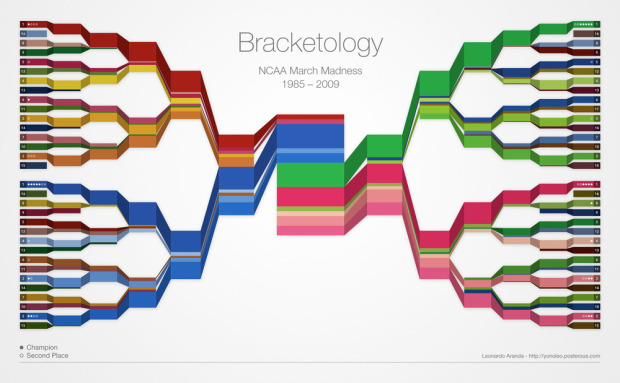 The Final Four is just about here. Who’s going to win it all? It’s anyone’s guess at this point, but what we can do while we wait is examine who’s won in the past. Leonardo Aranda takes a gander at who has won in each round since 1985, by ranking, with a color-coded bracket that resembles a stacked area chart.

I think if he used just two colors per corner (instead of entire palettes) and brightness indicating rank, it might be a bit easier to read in the first rounds. At the very least, you could find the Cinderella stories quicker, which is the most exciting part of the tournament a lot of the time.

I still like the concept though. It reminds me of Stephen’s crayon colors.

Who’s your money on?