Demographics in World of 100 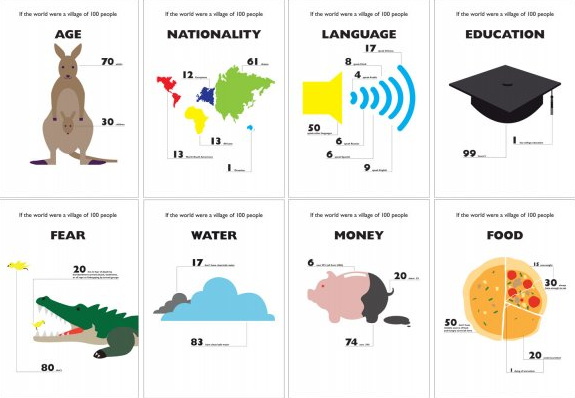 Designers seem to have taken a liking to the idea of showing world statistics as a village of 100. For example, if the world were a village of 100 people, 48 of them would be men. While we’re essentially just looking at percentages, the village metaphor seems to do a better job at humanizing the numbers. Along the same lines, this poster series from Tony Ng, World of 100, uses simple graphics to relate to demographics like money, food, and computers:

This is a self-initiated project based on the scenario â€“ If the world were a village of 100 people. There are a few different versions of this text in circulation about the worldâ€™s statistics. I found the data very striking and neatly summarises the world that we live in. So I used information graphics to re-tell the story in another creative way.

A few of the graphics seem kind of random, but hey, it’s amusing.

[via The Daily Dish]