Social Data Analysis by the Swarm 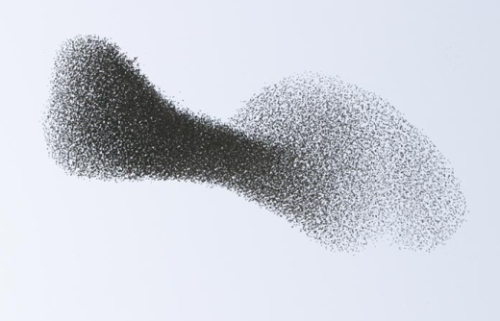 Swarm Theory, by Peter Miller, talks about how some animals, as individuals, aren’t smart, but as a group or a swarm, they can do amazing things. The above is a flock of starlings that can change shapes even though no single bird is the leader.

Can we apply swarm theory to social data analysis? As individuals, we might not be able to hold onto or understand a dataset, but as a group, we can come at a dataset from different perspectives, look at very small parts, and then as an end result — extract real, worthwhile meaning.

That’s how swarm intelligence works: simple creatures following simple rules, each one acting on local information. No ant sees the big picture. No ant tells any other ant what to do. Some ant species may go about this with more sophistication than others. (Temnothorax albipennis, for example, can rate the quality of a potential nest site using multiple criteria.) But the bottom line, says Iain Couzin, a biologist at Oxford and Princeton Universities, is that no leadership is required. “Even complex behavior may be coordinated by relatively simple interactions,” he says.

It reminds me of that common saying, or maybe it’s a quote, about how if you put a bunch of monkeys in a room with typewriters, you’ll eventually get the works of Shakespeare via the magic of probability. While the whole monkey thing is a bit far-fetched, swarm theory is certainly worth my attention.