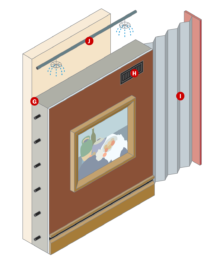 The Getty’s architect, Richard Meier, built fire resistance into the billion-dollar complex, said Ron Hartwig, vice president of communications for the J. Paul Getty Trust. These hills are fire prone, but because of features like the 1.2 million square feet of thick travertine stone covering the outside walls, the crushed rock on the roofs and even the plants chosen for the brush-cleared grounds, “The safest place for the artwork to be is right here in the Getty Center,” he said.

It’s a short visual piece, but I found the forethought in building design and the straightforward graphics fascinating.