Why buses bunch at single stops 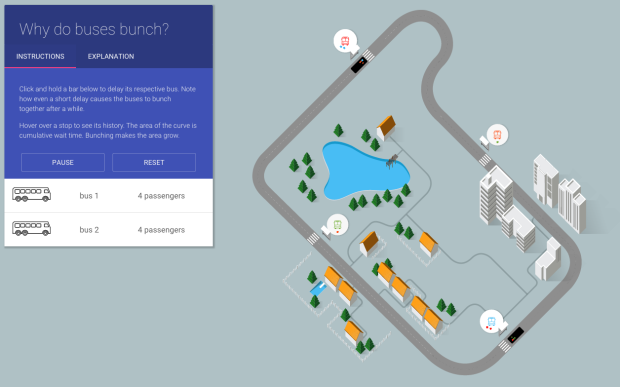 Maybe you’ve waited at a bus stop for longer than usual, and your bus finally shows up. And then, immediately after, a second bus on the same route pulls up right behind. What gives? Why can’t they stay evenly spaced to improve everyone’s waiting time? Lewis Lehe provides an explanation in a small interactive game.

Two buses travel along the same route, starting off in opposite positions. They make stops and pick up passengers right on schedule. But then add in your own small delays, and you see bunching relatively quickly. It really doesn’t take much to throw off the equal spacing.

So the next time you find yourself in a bunching situation. Don’t hate the driver. Hate the system.

See also Lehe’s other interactive explainers on traffic gridlock and congestion. Lehe, by the way, is a PhD candidate in transportation engineering.