Last month, This American Life ran a story about research that asked if you could change people’s mind about issues like same-sex marriage and abortion — with just a 22-minute conversation. The research was published in Science, but Donald Green asked the publication to retract the paper recently. It seems his co-author and UCLA graduate student, Michael LaCour, made up a lot of data.

Green today told me if there was no survey data, what’s incredible is that LaCour produced all sorts of conclusions and evaluations of data that didn’t exist. For instance, he had “a finding comparing what people said at the door to canvassers to what they said on the survey,” according to Green. “This is the thing I want to convey somehow. There was an incredible mountain of fabrications with the most baroque and ornate ornamentation. There were stories, there were anecdotes, my dropbox is filled with graphs and charts, you’d think no one would do this except to explore a very real data set.”

“All that effort that went in to confecting the data, you could’ve gotten the data,” says Green.

Stanford and Berkeley researchers found that something seemed off when they tried to reproduce the results. Their full report is available for reading, which includes the data in question and R code that explains their reasoning.

Perhaps one should note that the dataset is not definitely a fake. Noted by the examiners:

And it was enough for Green to request a retraction, so there’s that.

With this in mind, it’s especially interesting to visit LaCour’s website, which includes a lot of graphs from the original study. Graphs, which typically lend a feeling of concreteness to a subject — especially scientific research — almost have an opposite effect. 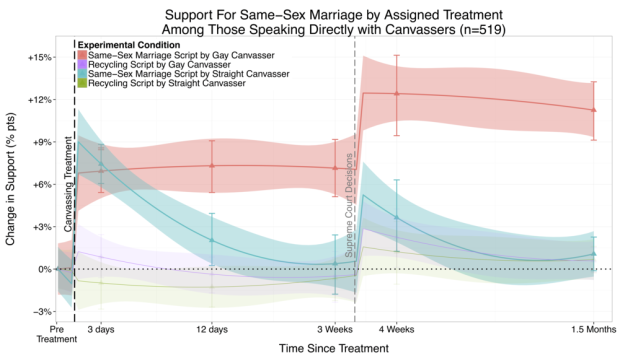 LaCour is currently “gathering evidence” to provide a comprehensive rebuttal.

Update: More details from This American Life. It gets weirder.