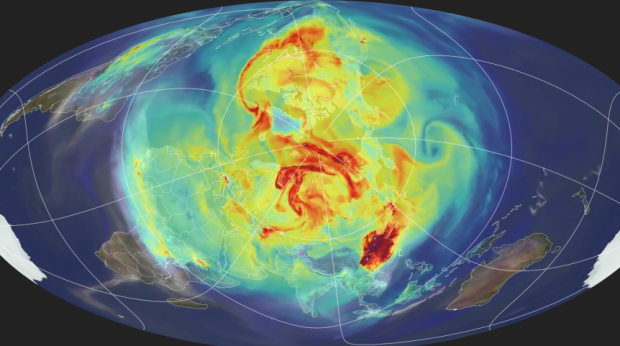 The Cartography and Geovisualization Group at Oregon State University and NASA visualized a one-year life cycle of carbon dioxide in an interactive video map.

The visualization is a product of a simulation called a “Nature Run.” The Nature Run ingests real data on atmospheric conditions and the emission of greenhouse gases and both natural and man-made particulates. The model is then left to run on its own and simulate the natural behavior of the Earth’s atmosphere. This Nature Run simulates January 2006 through December 2006.

Click and drag to change the projection, and turn the volume on to hear an explanation of what you’re seeing. Good stuff.

Here’s a video in case you can’t look at the interactive right now.

The Oregon group’s other projects are also worth a look.