Find the fastest flight between airports 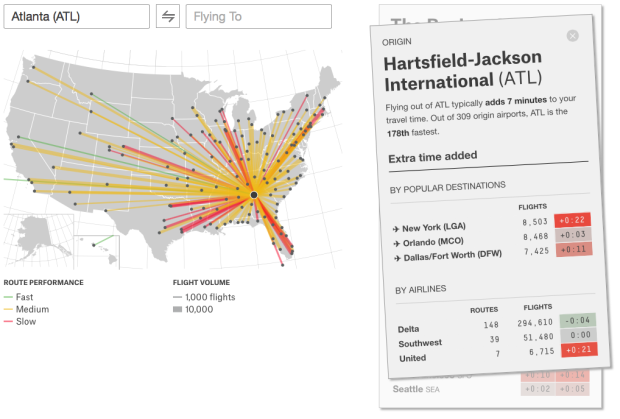 Flight arrival and departure times are often thought of in terms of “on time” or “delayed.” To determine the “best” airline, we look for the airline with the highest rate of on time flights. That makes sense, until you consider that many airlines pad their schedules with extra minutes.

If your flight is late, it still seems like it’s on time and if it’s actually on time, it seems like you arrive early.

FiveThirtyEight attempts to take this into account. They also weight delay times, because a 15-minute delay is different from a two-hour delay, and they treat regional carriers differently than the major ones, because regionals tend to be much slower.

And ultimately, it’s not so much about delays and on time rates as it is, “Which flight is gonna get me there fastest?” FiveThirtyEight’s interactive can help with that.

Just select an origin airport and a destination, and you get a list of airlines with their typical add-on minutes.