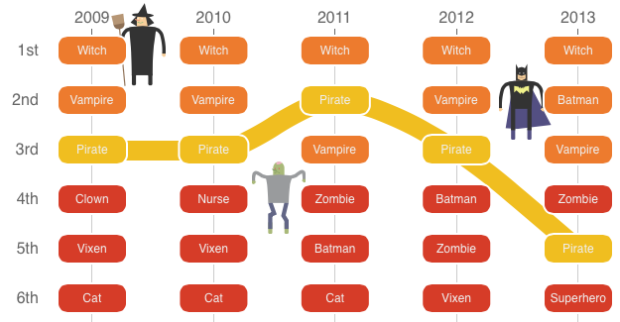 Accompanying their segment on Halloween stores stocking costumes, NPR ranks bestsellers for the past four years, based on data from the National Retail Foundation. Note that these are rankings for adult costumes, so it’s safe to assume that all of these costume names are preceded by “sexy.” (Kidding.)

I’m surprised there aren’t more topical costumes towards the top. For example, the segment touches on Walter White costumes flying off the shelves last year, but I’m guessing the data probably only covers the pre-packaged stuff. Also guessing a similar reason for why Superman and Batman aren’t counted as generic superhero, or Dracula as vampire.

See the full graphic on NPR.