What a few thousand fake followers gets you 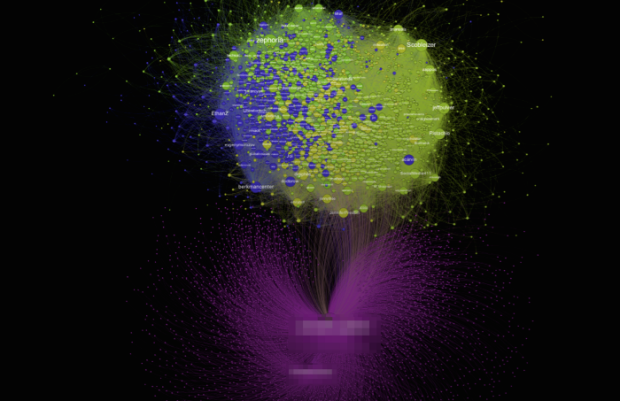 There are a lot of fake, spammy accounts on Twitter that come in a variety of forms. Some tweet links to junk, some serve as retweet and faving bots, and others exist purely to boost follower counts. Gilad Lotan, a data scientist at betaworks, was curious about that last type, so he bought 4,000 followers for five bucks and looked closer at his new found friends.

Above is a network of his followers. The blue and yellow cloud on top are his natural followers, before the purchase. They’re closely connected and have similarities in one form or another. The new followers are on the bottom, disparate and floating in their own clouds somewhere.

The worst part though is that the boost, however fake it was, might have kinda helped build momentum for more real followers.

I’m not recommending anyone go out and buy followers. In fact, I can’t get over the feeling that it’s pretty sleazy. But I do believe that acquiring just the right amount, as much as I hate to write it, may have a positive long-term effect on acceleration of growth and visibility.

Last month I noticed a guy tweeting multiple links to Flowingdata every day. I thought it odd, because the selected links seemed random. Some were new, others were old, and they weren’t topically related. They were also getting around 100 retweets and favorites, which was weird because he only had around 10,000 followers. I have a few more followers than that, and 100 interactions is an outlier for me, so I figured he must have some loyal followers who like FlowingData. Fine by me.

But then his tweets kept showing up in my notifications multiple times per day. So I finally looked at who was retweeting and favoriting. All I saw was a bunch of feeds made up of only retweets. Just retweeting bots. Blocked.

… and whoa, I feel all ranty now. (I just deleted a couple of paragraphs.) I have a low threshold for the lazy and people who only want the easy way out, sans work. You don’t need to hear about that.

Winding it back. Dialing back.

Anyway, Lotan’s analysis is a fun read. Has anyone done an analysis on interactions between spam accounts? I have a theory that a good chunk of activity on Twitter is spam accounts in a separate Twitter universe conversing in depth about prescription medicine availability and its potential harm to today’s youth.