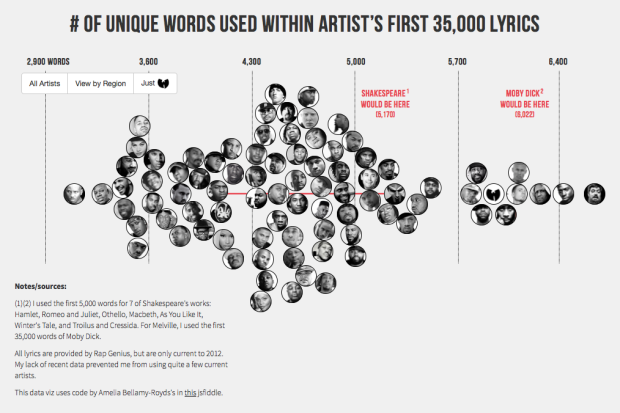 Matt Daniels compared rappers’ vocabularies to find out who knows the most words.

Literary elites love to rep Shakespeare’s vocabulary: across his entire corpus, he uses 28,829 words, suggesting he knew over 100,000 words and arguably had the largest vocabulary, ever.

I decided to compare this data point against the most famous artists in hip hop. I used each artist’s first 35,000 lyrics. That way, prolific artists, such as Jay-Z, could be compared to newer artists, such as Drake.

I’m not sure how much stock I would put into these literary comparisons though, because this is purely a keyword count. So “pimps”, “pimp”, “pimping”, and “pimpin” count as four words in a vocabulary and I have a hunch that variants of a single word is more common in rap lyrics than in Shakespeare and Melville. Again, I’m guessing here.

That said, although there could be similar issues within the rapper comparisons, I bet the counts are more comparable.