Lawmaking through the House and Senate visualized 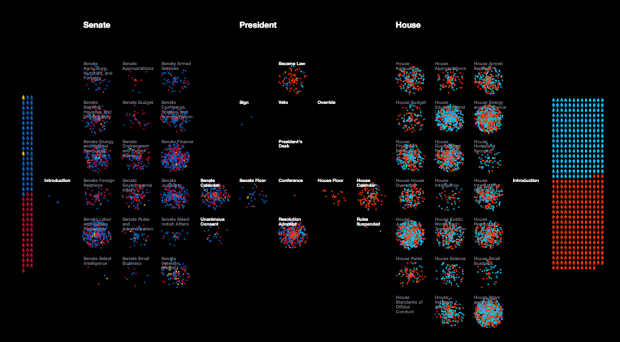 Researchers at the University of Washington’s Center for American Politics and Public Policy built the Legislative Explorer to show the lawmaking process in action. The visualization allows you to watch over 250,000 bills and resolutions introduced from 1973 to present.

The left half represents the U.S. Senate, with senators sorted by party (blue=Democrat) and a proxy for ideology (top=liberal). The House is displayed on the right. Moving in from the borders, the standing committees of the Senate and House are represented, followed by the Senate and House floors. A bill approved by both chambers then moves upward to the President’s desk and into law, while an adopted resolutions (that does not require the president’s signature) moves downward.

Each dot represents a bill, so you can see them move through the levels. Use the drop-down menus at the top to focus on a Congress, a person, party, topic, and several other categorizations. Or use the search to focus on specific bills. Finally, when you do press play, be sure to keep an eye on the counters on the bottom.