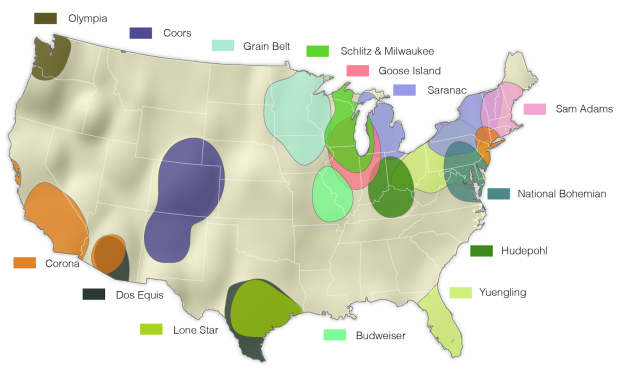 FloatingSheep pointed their Twitter geography towards beer (and wine).

From Sam Adams in New England to Yuengling in Pennsylvania to Grain Belt and Schlitz in the upper Midwest, these beers are quite clearly associated with particular places. Other beers, like Hudepohl and Goose Island are interesting in that they stretch out from their places of origin — Cincinnati and Chicago, respectively — to encompass a much broader region where there tend to be fewer regionally-specific competitors, at least historically. On the other hand, beers like Lone Star, Corona and Dos Equis tend to have significant overlap in their regional preferences, with all three having some level of dominance along the US-Mexico border region, but with major competition between these brands in both Arizona and Texas.

This of course excludes the increased appreciation for craft beer, as there isn’t enough data for significant microbrewery results.