Beer Mapper: An experimental app to find the right beer for you 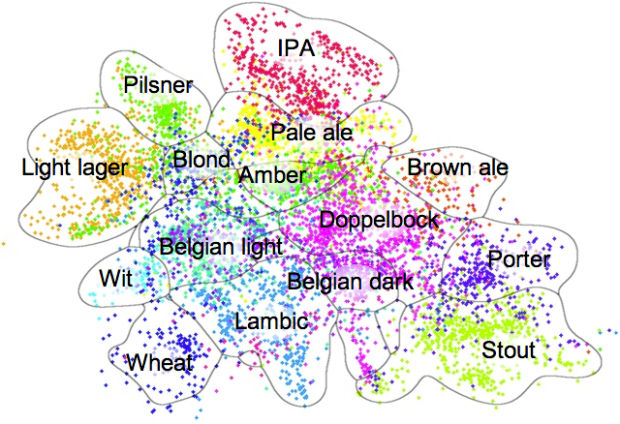 Kevin Jamieson, an electrical and computer engineering graduate student at the University of Wisconsin-Madison, put his work in active ranking into practice. The experimental app is called Beer Mapper.

The application presents a pair of beers, one pair at a time, from a list of beers that you have indicated you know or have access to and then asks you to select which one you prefer. After you have provided a number of answers, the application shows you a heat map of your preferences over the “beer space.”

Around 10,000 beers with at least 50 reviews on RateBeer were used as the foundation of the recommendation system. The reviews were reduced to just the individual words and counts, which gives sort of a profile for each beer (or a “weighted bag of words”). You rate beers, and the system tries to find profiles that are mathematically most similar.

Two caveats. The first is that it looks like the app just gives you a heat map of the styles of beer you might like. A recommended list of actual beers would be way better. Second, the app is a research project that likely won’t be in the app store any time soon, so the first point is moot. Sad face. Maybe Untappd should read Jamieson’s paper. [via Fast Company]