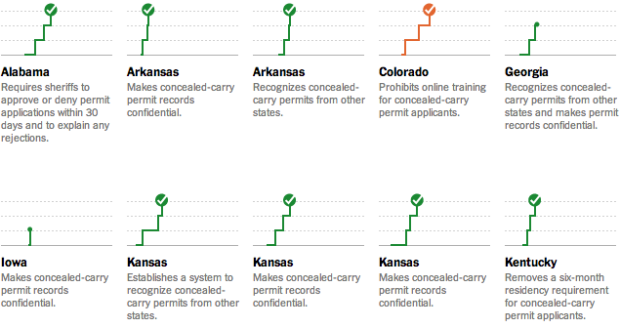 In the 12 months since the mass shooting at Sandy Hook Elementary School in Newtown, Conn., almost every state has enacted at least one new gun law. Nearly two-thirds of the new laws ease restrictions and expand the rights of gun owners. Most of those bills were approved in states controlled by Republicans. Those who support stricter regulations won some victories — mostly in states where the legislature and governorship are controlled by Democrats — to increase restrictions on gun use and ownership.

Each chart shows the timeline of a bill and rounds of legislation. A law is signed when the line reaches the top, where green represents looser gun restrictions and orange represents tighter.