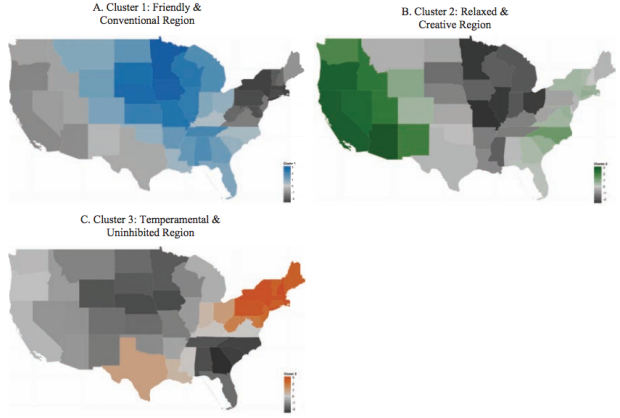 There is overwhelming evidence for regional variation across the United States on a range of key political, economic, social, and health indicators. However, a substantial body of research suggests that activities in each of these domains are typically influenced by psychological variables, raising the possibility that psychological forces might be the mediating or causal factors responsible for regional variation in key indicators.

They found three main clusters, mapped above: friendly and conventional, relaxed and creative, and temperamental and uninhibited.

The maps suggest that states belong only to specific clusters, but I suspect it’s a more continuous scale. For instance, a state might be partially part of cluster 1 and 2, not really 3, as opposed to just cluster 1. Still though, it’s an interesting start. Now if only the data they used were more easily accessible.