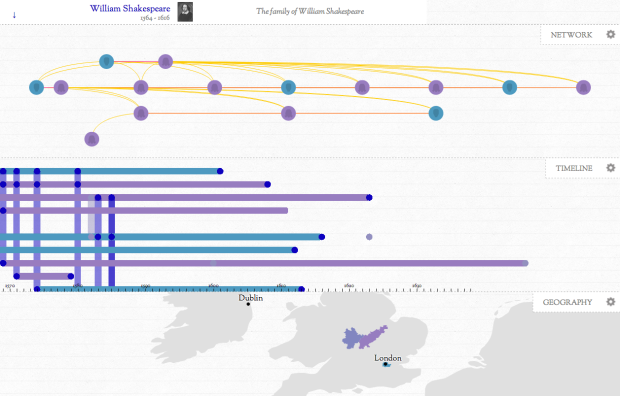 In Kindred Britain, Nicholas Jenkins, Elijah Meeks and Scott Murray provide a visual exploration of how thousands of well-known British people are connected through blood and marriage.

Kindred Britain assembles and visualizes records of nearly 30,000 individuals, mainly (but not exclusively) British. Many of them are extremely well-known in the nation’s culture. The database in its entirety spans more than 1,500 years, but the time-period of densest concentration comes in the 19th century. Any person recorded here can be connected to any other person in the network through family relationships of ancestry, descent, siblinghood, marriage or some other type of familial affiliation. In Kindred Britain, family is all. The site is a panorama of engineers and painters, novelists and generals, scientists and merchants, and even a few reprobates, misanthropes and monsters.

Think of it as a Six Degrees of Kevin Bacon but for mostly non-acting British people. Or the recent research on the six degrees of Francis Bacon, with a heavy interactive component.

Start with one of the people pairs via the connections tab for a quick idea of how things work. I found it helpful to keep the geography and timeline views closed in the beginning to get a feel for the setup, and then it was fun to browse through random people to see how they were related. 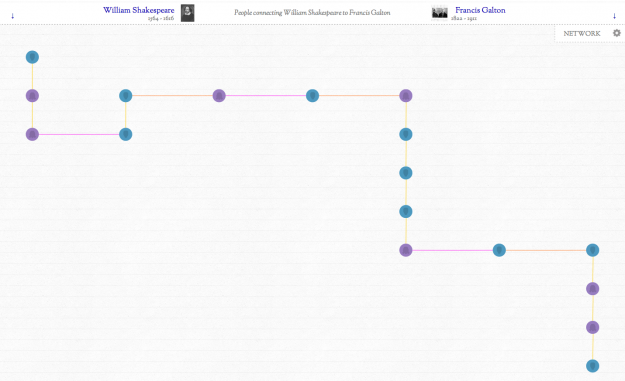 William Shakespeare’s daughter Elizabeth Hall married John Bernard, whose father was Baldwin Bernard. Baldwin Bernard’s sister was Anne Bernard, and she married James Harrington. James Harrington had a sister Mabel. Mabel had a son Edward Noel, who had a son Baptist Noel, who had a son John Noel, who then had a daughter Bridget Noel. Bridget Noel married David Colyear. David Colyear had a brother Charles Colyear. Charles Colyear had a daughter Elizabeth Colyear, and she had a daughter Frances Anne Violetta Darwin. Francis Anne Violetta Darwin had a son. His name was Francis Galton. Boom.

(I wish there were a built-in generator to describe the relationship paths in words.)