An eerie view of the linked city 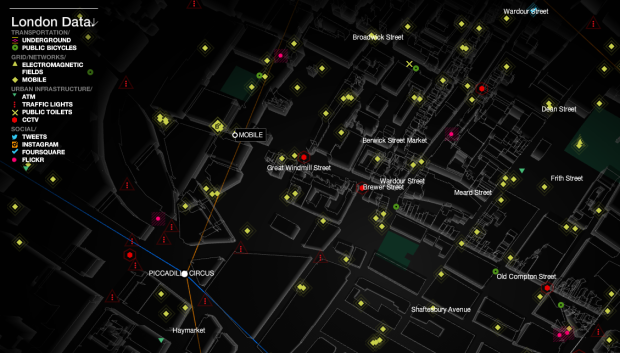 Watch_Dogs is a video game that imagines Chicago as a city where everyone and everything is linked through a central network. You play as a hacker who has access to all this information. This of course is fiction, but WeareData, also by the game makers, shows Paris, Berlin, and London, as if it were the Chicago in the game using real-world data.

Watch_Dogs WeareData is the first website to gather publicly available data about Paris, London and Berlin, in one location. Each of the three towns is recreated on a 3D map, allowing the user to discover the data that organises and runs modern cities today, in real time. It also displays information about the inhabitants of these cities, via their social media activity.

The ambient music, sound effects, and aesthetics provide a eerie feel to the view, as if you’re spying on these cities from above. Although as you click items on the map, you’ll see the data is not nearly as ominous.