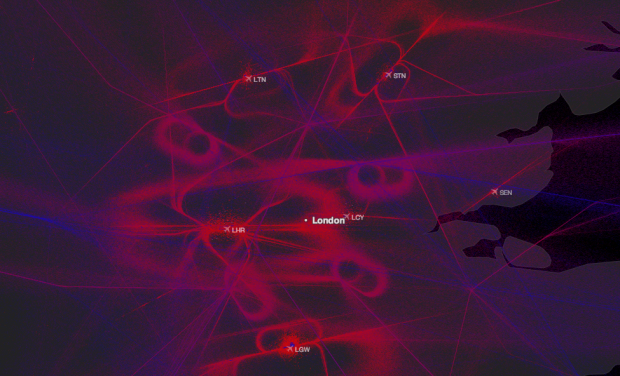 Alexey Papulovskiy collected flight data from Plane Finder for a month, which essentially gives you a bunch of points in space over time. Then he mapped the data in Contrailz.

Turns out, besides Flight Levels (FL) (which are indicated on my map by dots’ color: red ones stand for lower altitudes and blue — for higher) planes have pretty specific “roads” and “highways” as well as “intersections” and “junctions”. You can see this for yourself by taking a look at the Russian part of the map: it’s less “crowded”, so the picture is as clear as it gets. The sky above Moscow area looks particularly interesting: civil flights are allowed there only since March 2013 and only with an altitude of 27.000 ft or higher.

Aaron Koblin’s Flight Patterns always comes to mind immediately when I see flight data, and Contrailz of course looks similar, but the latter brings in European flight patterns, too, which makes it worth a gander.

By the way, you should also check out Plane Finder if you haven’t seen that yet. It shows planes currently in flight, and there’s a lot of them. [Thanks, Alexey]