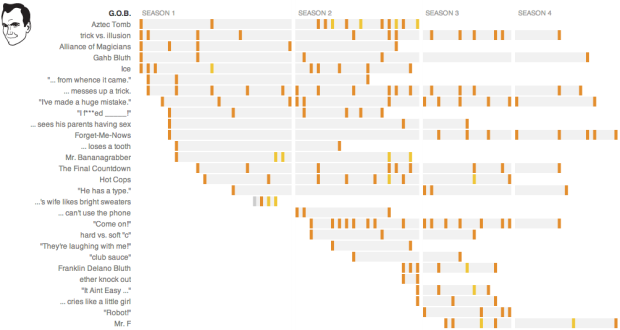 In celebration of Arrested Development’s return via Netflix, NPR combed through the jokes — obvious and obscure — and set them in a handy interactive guide.

Arrested Development is back! Because we care about your watching enjoyment, we wrote down all the recurring gags in every episode — including the new season 4 episodes — with special attention to jokes hidden in the background (like Cloudmir vodka) or being foreshadowed (like when Buster lost his hand).

The three categories of joke are color-coded, where each row represents a joke and a tick represents an occurrence of that joke over four seasons.

I’ve only watched a handful of episodes, but I’m tempted to turn on Netflix with this guide in front of me. [Thanks, @onyxfish]