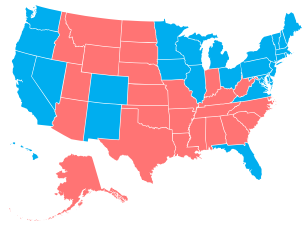 Add another way to make state-level choropleth maps. Stately, a project by Intridea, allows you to approach state mapping in the browser like you would a font.

Stately is a symbol font that makes it easy to create a map of the United States using only HTML and CSS. Each state can be styled independently with CSS for making simple visualizations. And since it’s a font, it scales bigger and smaller while staying sharp as a tack.

The process is fairly straightforward: Link to the Stately stylesheet, add some HTML markup (an unordered list of states) to your page, and then use CSS to color each state. Boom, you’ve got yourself a map.