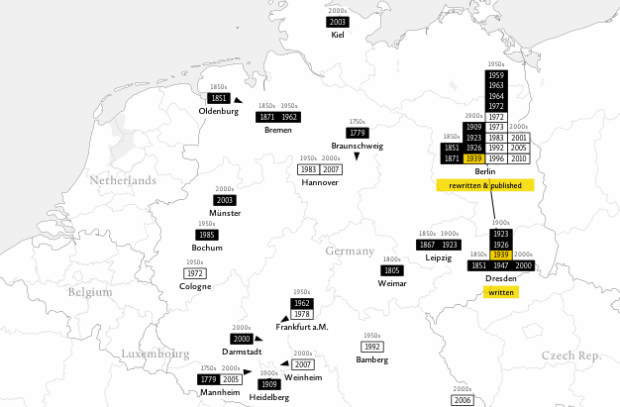 Tom Cheesman of Swansea University, along with Kevin Flanagan and Studio NAND, dives into translations of Shakespeare’s Othello with TransVis.

TransVis collects, digitises, analyses and compares translations and variations of literary works. In an initial prototype named VVV (»Version Variation Visualisation«), we have proposed analysis methods, interfaces and visualization tools to explore 37 translations of Shakespeare’s Othello into German with more works translated into other languages to come.

The map is more of a browser to see where specific publications were written, rewritten and published, but I wonder if you’ll see anything interesting if you looked at just where something is rewritten or translated. It’d be like seeing ideas spreading. Or you know, Twilight copies.