FIFA development work around the world 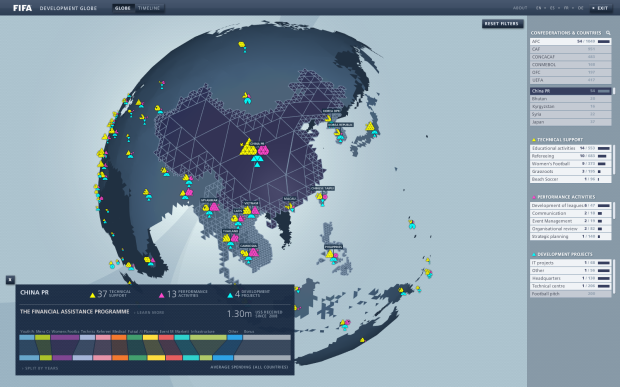 Studio NAND and Moritz Stefaner, along with Jens Franke explore FIFA development programs around the world.

The globe itself is an icosahedron, or essentially a spherical shape made up of triangles. Triangles in each country represent programs and are colored by the three above categories, and you might recognize Moritz’ elastic lists in the sidebar to filter through programs, by country, organization, and type. There’s also a timeline view, which shows program development over the past five years.

Give it a go here. I should warn you though that it runs in Flash (a client requirement), and it could run sluggish depending on your machine. Sometimes I was disorientated by the interaction and animation, especially when I clicked and nothing happened until a few seconds later.