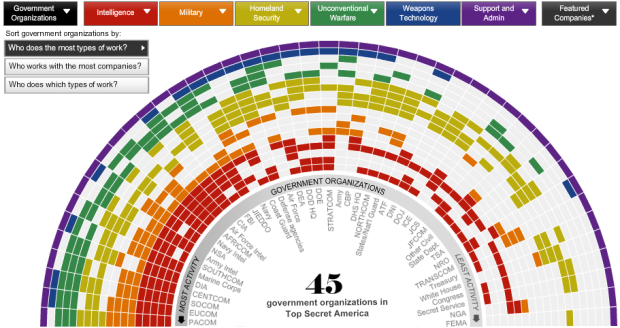 In response to the the 9/11 attacks, the United States government created a highly secretive set of organizations with zero transparency and very little oversight. How much money do these secret programs cost? How many people do they employ? The Washington Post reports on Top Secret America:

These are some of the findings of a two-year investigation by The Washington Post that discovered what amounts to an alternative geography of the United States, a Top Secret America hidden from public view and lacking in thorough oversight. After nine years of unprecedented spending and growth, the result is that the system put in place to keep the United States safe is so massive that its effectiveness is impossible to determine.

The series of articles, video, and graphics, allow readers to explore the information themselves.

Click on a specific organization for within group breakdowns. At this point it gets a little confusing with drill-down pie charts, especially if you’re just browsing, and a spiral view is also offerred which feels extraneous. The overall story and heavy research, however, makes it worth clicking through the clunky at times set of interactives.