The Los Angeles Times released nearly 5,000 records of allegations from the Boy Scouts of America as a browseable map and searchable list. You can also download the data.

This data­base con­tains in­form­a­tion on about 5,000 men and a hand­ful of wo­men who were ex­pelled from the Boy Scouts of Amer­ica between 1947 and Janu­ary 2005 on sus­pi­cion of sexu­al ab­use. The dots on the map in­dic­ate the loc­a­tion of troops con­nec­ted in some way to the ac­cused. The timeline be­low shows the volume of cases opened by year; however, an un­known num­ber of files were purged by the Scouts pri­or to the early 1990s

The interactive map helps you narrow down by city, but it’s kind of hard to see cases on a country-wide perspective. Here’s a quick look. 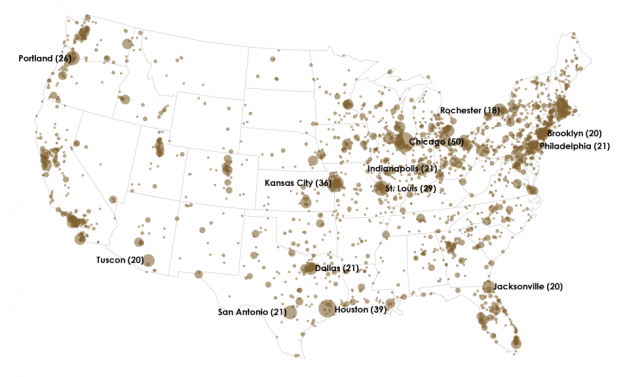 The worst part is that a lot of the cases went unreported.