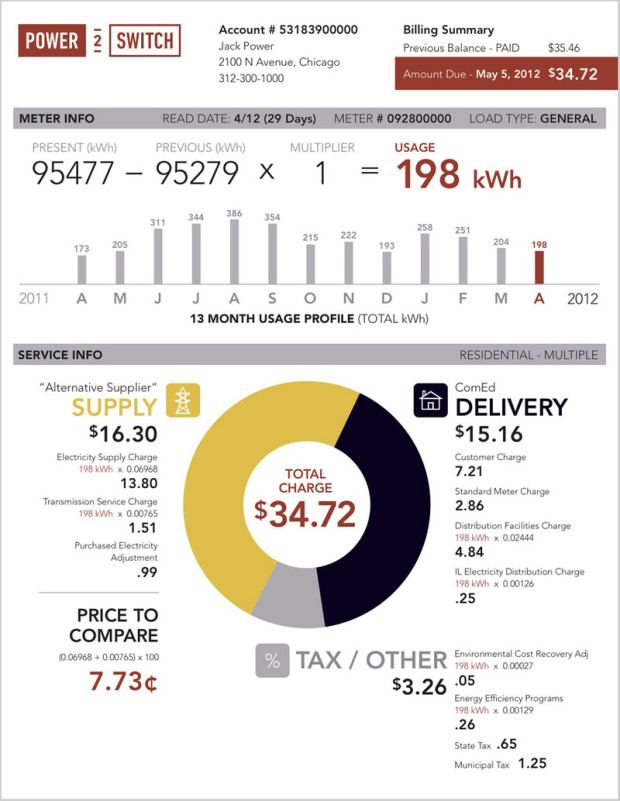 The electricity bill (or all utility bills, really) haven’t changed much over the years. It’s basically computer output. Power2Switch, a site that helps you compare electricity prices, took a stab at redesigning the barebones bill. (Don’t miss the comments in the FastCompany post.)

While a step in the right direction, the redesign still needs to go through the revision cycle a few more times.

My first impression was that I wasn’t sure where to focus. There’s so much bold that my eyes bounced around trying to figure out what I was seeing. I get the visual hierarchy through different font sizes, but I don’t think it’s enough.

When I get an electricity bill, my first two questions are how much I owe and whether I owe more than I usually do. The first question is in red in the top right corner, and the second question is sort of answered with the previous balance above that. Only one previous month isn’t enough to see a pattern though.

You arguably could get that from the usage bar chart, but I don’t care how much electricity I used, and if price varies, I still don’t know the changes in cost from this bill alone. When I got my first few electricity bills after moving, for comparison, I asked others what they usually pay, not how many kilowatt hours they pay for. Speaking of which, local fluctuations could be useful here.

The service information section is the most confusing. I think the point is to show the cost breakdown for suppliers so that customers can make better-informed decisions, but what is an alternative supplier? Would it have been more useful to label total supply cost as total supply cost instead of price to compare?

I’m all for a utility bill redesign, but at this point, I’d rather get the old one with supply services and total due highlighted.