Not so good use of pie charts 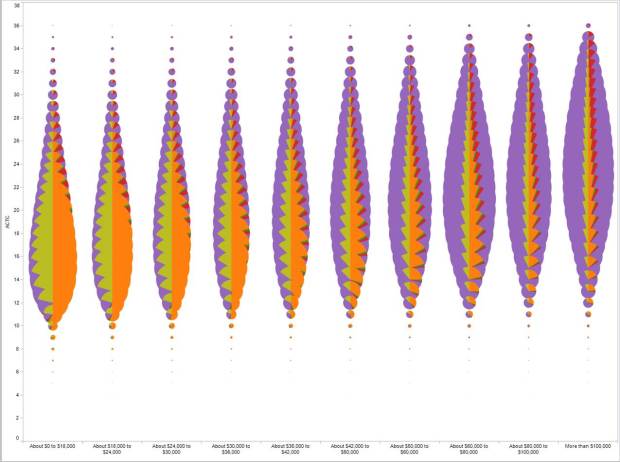 I warned Nathan that I was going to drop a pie bomb on Flowing Data. Well, here it is; it’s labeled by its creator as a “feather chart.” I really hate to pick on people. I truly think Jon made a valiant attempt to use pie charts innovatively. However, this chart is not effective.

The chart uses 11 million ACT records (for international readers, that’s a standardized test in the US). It’s trying to show the relationship between ethnicity and test score and income and test score.

I created the y-axis as the ACT composite score, and then used self-reported income bands as the x-axis. Both are discrete, categorical values, even though ACT is numeric. ACT increases bottom-to-top, and income bands increase left-to-right. At the intersection of each variable is a pie chart, sized by the number of students in that group, and colored by ethnicity

The only problem is that the overlapping pie charts occlude one another. Unless one section of the pie chart dominates and allows the other sections to peek out over the top of the previous pie, then the chart is useless. For instance, in the first feather, there’s no way to know if the orange section is 40% or 60% for most of the chart.

This chart has really good intentions, but the data would be better served with a bean or violin plot. If you’re a subscriber, you can check out Nathan’s great tutorial from last week about visualizing distributions.