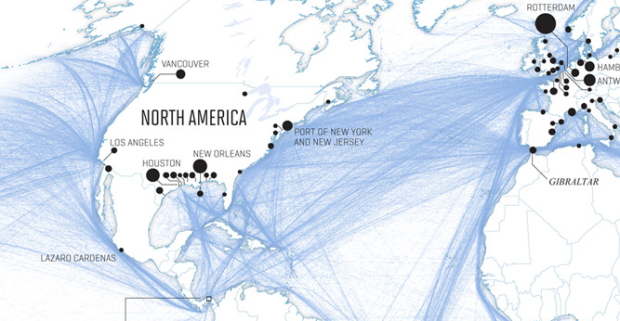 Nicolas Rapp dives into the patterns and growth of worldwide shipping in a six-page spread for Fortune Magazine.

Nearly 90% of all goods traded across borders travel, in part, by sea. Typically a ship will undertake six voyages a year. The fastest-growing routes are between ports in Asia, while goods moving out of that continent account for 43% of all maritime trade, according to IHS Global, an economic forecasting firm. Today the most heavily trafficked sea route is between China and the West Coast of the U.S. The total value of goods that travel from China to the U.S. is four times that of those on the return trip—a clear symbol of America’s trade deficit.

Despite a gap of a few centuries, the routes today still look a lot like the ones from the 18th century.