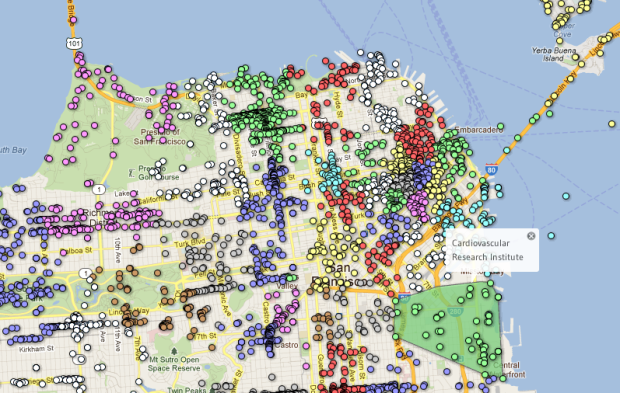 Researchers at the School of Computer Science at Carnegie Mellon University investigate the structure of cities in Livehoods, using foursquare check-ins.

The hypothesis underlying our work is that the character of an urban area is defined not just by the the types of places found there, but also by the people who make the area part of their daily routine. To explore this hypothesis, given data from over 18 million foursquare check-ins, we introduce a model that groups nearby venues into areas based on patterns in the set of people who check-in to them. By examining patterns in these check-ins, we can learn about the different areas that comprise the city, allowing us to study the social dynamics, structure, and character of cities on a large scale.

It’s most interesting when you click on location dots. A Livehood is highlighted and a panel on the top right tells you what the neighborhood is like, related neighborhoods, and provides stats like hourly and daily pulse and a breakdown location categories (for example, food and nightlife). Does foursquare have anything like this tied into their system? They should if they don’t.

There’s only maps for San Francisco, New York City, and Pittsburgh right now, but I’m sure there are more to come.

Want more on the clustering behind the maps? Here’s the paper [pdf].