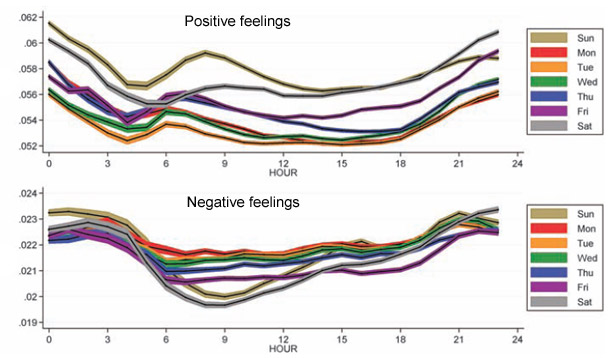 In a follow-up to their mood maps, Scott Golder and Michael Macy of Cornell University look at mood cycles during the hours of the day:

They found that, on average, people wake up in a good mood, which falls away over the course of the day. Positive feelings peak early in the morning and again nearer midnight, while negative feelings peak between 9pm and 3am. Unsurprisingly, people get happier as the week goes on. They’re most positive on Saturdays and Sundays and they tend to lie in for an extra two hours, as shown by the delayed peak in their positive feelings. The United Arab Emirates provide an interesting exception. There, people work from Sunday to Thursday, and their tweets are most positive on Friday and Saturday.

It’s strange that good mood peaks around midnight. Maybe the people who are in a bad mood slowly go to sleep, leaving only those in a good mood to tweet. Then again, negative mood also seems to peak around midnight. Peculiar. I don’t have access to the full article, so if anyone does, I’d be interested to hear Golder and Macy’s interpretations.