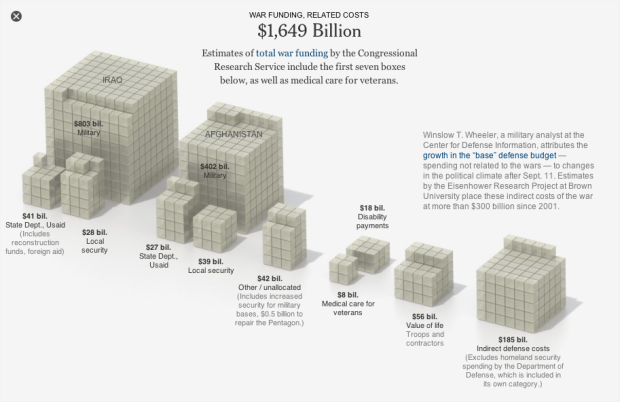 This Sunday will be 10 years since the attacks on September 11. Amanda Cox and Shan Carter of The New York Times look at the financial tally, an estimated $3.3 trillion:

Al Qaeda spent roughly half a million dollars to destroy the World Trade Center and cripple the Pentagon. What has been the cost to the United States? In a survey of estimates by The New York Times, the answer is $3.3 trillion, or about $7 million for every dollar Al Qaeda spent planning and executing the attacks. While not all of the costs have been borne by the government — and some are still to come — this total equals one-fifth of the current national debt. All figures are shown in today’s dollars.

A single cube in each stack represents $1 billion. The initial view is money spent in five categories. Click on any stack for a subcategory breakdown. Sobering.