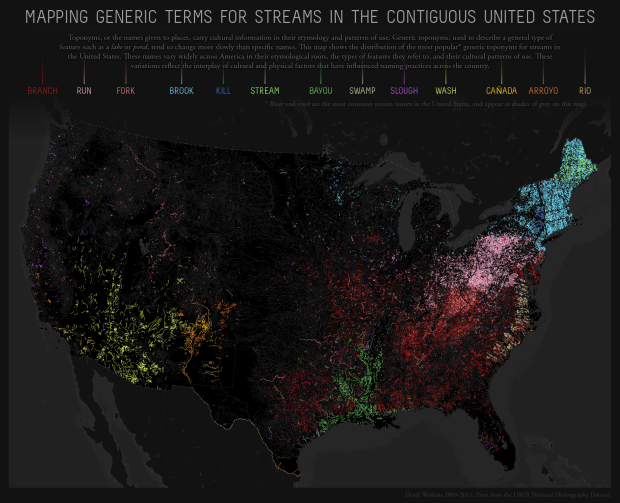 The names of places can say a lot about a geographic area. Derek Watkins maps the most common term for a stream across the country. You’ve got branches and bayous in the south, brooks and streams in the northeast, and washes and arroyos in the southwest.

Some historical context from Watkins:

Lite-Brite aesthetic notwithstanding, I like this map because it illustrates the range of cultural and environmental factors that affect how we label and interact with the world. Lime green bayous follow historical French settlement patterns along the Gulf Coast and up Louisiana streams. The distribution of the Dutch-derived term kill (dark blue) in New York echoes the colonial settlement of “New Netherland” (as well as furnishing half of a specific toponym to the Catskill Mountains). Similarly, the spanish-derived terms rio, arroyo, and cañada (orange hues) trace the early advances of conquistadors into present-day northern New Mexico, an area that still retains some unique cultural traits. Washes in the southwest reflect the intermittent rainfall of the region, while streams named swamps (desaturated green) along the Atlantic seaboard highlight where the coastal plain meets the Appalachian Piedmont at the fall line.