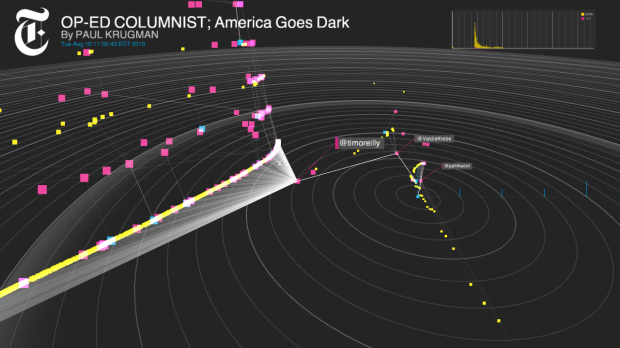 For online publications, it’s useful to know how people share links to articles and news via outlets such as Twitter. How does an article go from publication to viral? Does one person with a lot of Twitter followers share a link, or is getting lots of individuals to tweet the key? You have retweet counts, but that doesn’t tell you anything within the sharing timeline—just the final result.

This first-of-its-kind tool links browsing behavior on a site to sharing activity to construct a detailed picture of how information propagates through the social media space. While initially applied to New York Times stories and information, the tool and its underlying logic may be applied to any publisher or brand interested in understanding how its messages are shared.

I suggest you watch the short summary video for an explanation on how it all works, but in short, there are several views that let you view the data in a variety of dimensions.

In the initial circular view, time starts in the center. This is when an article is actually published. Then each ring is another hour past, and each square is an activity such as link shortening or retweeting. For example, in the above the op-ed article America Goes Dark by Paul Krugman goes live. You should see a trickle of link-sharing in the beginning, but about five hours later, Tim O’Reilly tweets a link to his 1.4 million followers, and there’s a burst of activity as others retweet and comment.

Similarly, here is one view for an article on the JetBlue flight attendant who threw a hissy fit, and slide down an emergency slide. When you lay the circles flat, and look at activity on the vertical, you can see volume by time. 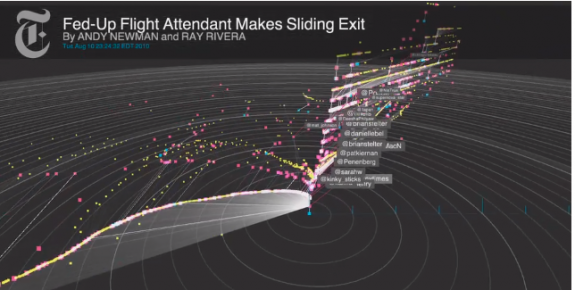 Or look at the data straight on for a strictly by-time view. 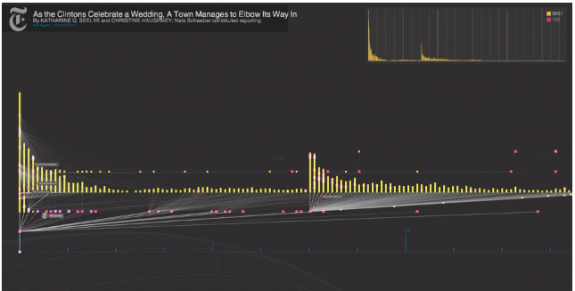 Impressive work, and this is just a small taste. I suspect there’s lot more, and as Jer notes, “Videos and screenshots don’t do Project Cascade justice – it runs on an iPhone-controlled 5 screen video wall.” I gotta get me one of those.