Watching the growth of Costco warehouses 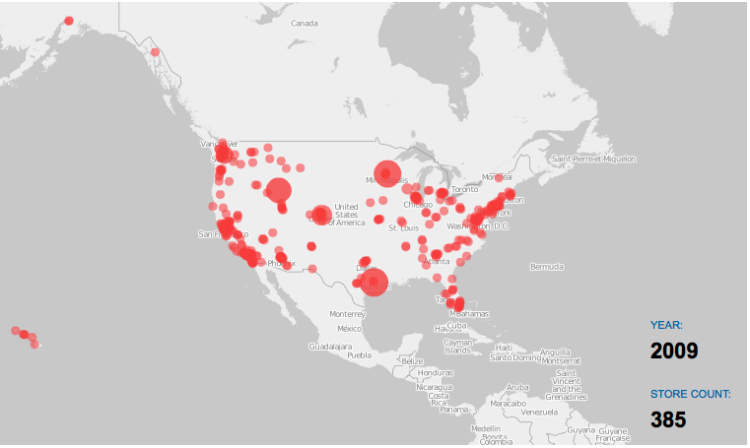 Costco is one of the best stores ever. It’s got everything you need in gigantic volumes and more, so you can imagine my delight when I stumbled on some store openings data I downloaded from Locations Complete a while back. Kind of the same feeling you get when you put on a jacket and find a twenty-dollar bill in the pocket.

I of course had to put the data into a growth map to watch how one of my favorite stores has grown since its first one a few decades ago. It’s not as wild as the Wal-Mart growth, which has thousands of locations, but it’s still fun to watch. Wal-Mart started in Arkansas and then spread outwards. In contrast, Costco, which has just over 400 locations (in the US), has focused on the coasts and has just started opening locations more inland.

There is a discrepancy though. According to Wikipedia, the first Costco was founded in 1983 in Seattle, but the data says 1976 in southern California, then in Arizona, and then Washington. I’m not sure what’s going on there, so take it with a grain of salt.

Update: From the comments and an actual Costco employee. The first Costco opened in 1983, and the first Price Club opened in 1976. The two companies merge in the 1990s, which explains the 1976 start.

It seems to be right for the Costcos in my hometown. Take a look for yourself. Is it right for your area?