Where people swear in the United States 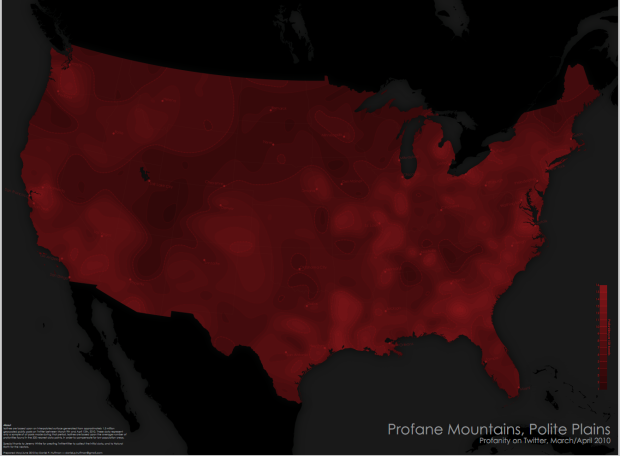 Cartographer Daniel Huffman has a look at swearing in the United States, according to geocoded tweets:

Isolines are based upon an interpolated surface generated from approximately 1.5 million geocoded public posts on Twitter between March 9th and April 12th, 2010. These data represent only a sample of all posts made during that period. Isolines are based upon the average number of profanities found in the 500 nearest data points, in order to compensate for low population areas.

The brighter the red, the more profanities used in the area, and the more black, the less swearing. Words looked for were (pardon my language): fuck, shit, bitch, hell, damn, and ass, and variants such as damnit. Honestly, I never swear like this. Unless some idiot pickup truck tailgates me going 80 on the highway in the middle of the night. That doesn’t count though.

Notice the patch of darkness in Utah?

Twitter should do stuff like this. The real-time stuff across significant events is great, but using tweets as a cultural barometer is even more interesting, I think.

Check out the high-res PDF at Cartastrophe.