Open thread: Is this map too confusing? 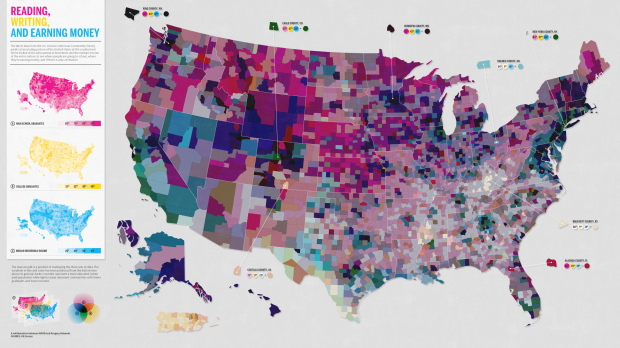 This map, a collaboration between Good and Gregory Hubacek, shows three metrics from the most recent American Community Survey by the US Census: high school graduates, college graduates, and median household income. The goal was to see if there’s a correlation between education and income. Does it work?

On the left you see the individual maps for each metric. The map on the right is a combination of all three so that each county is a mixture of three colors. A county with an orange hue, for example, is one with relatively more high school and college graduates but lower median income.

My first reaction was, gosh, that’s a lot of colors for my brain to process. But is there useful information to glean from map? What’s going on in the light pink and grayish areas in the southeast? What’s with all the green on the California coast?

While the map definitely couldn’t replace a more conventional X-Y plot or an actual regression analysis, could it at least be a supplement? Would it have worked better using just college graduates and median income? Sound off in the comments.

@moritz_stefaner: “Could have been a good idea – but it wasn’t. This must be the most complicated chloropleth [sic] map I have seen to date.”

@infosthetics: “@moritz_stefaner Don’t agree. You can find original insights, as article mentioned. It’s overwhelming. But it does not make false claims.”

@eagereyes: “A skilled designer may be able to decode the colors, but takes a lot of effort. Also ignores data dependencies.”

@awoodruff: “Wow, definitely a tough one to understand.”

@the_skua: “single-handedly one of the worst multi-variate maps ever? Nobody graduates from high school in California?”

@flinklabs: “why must a dataviz must [sic] require no thinking? Long term engagement vs the blip. not that the viz in question is not problematic…”