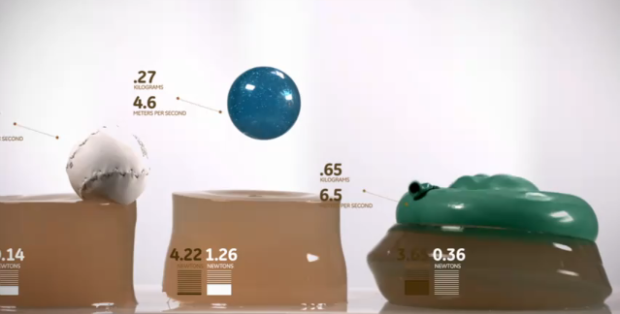 When you slow down your car, energy dissipates into the air as heat. What if your car could instead make use of that energy? Your car could run that much more efficiently and get more miles per gallon. GE explains such a system called dynamic braking (video below).

Energy: you can’t destroy it, but you can certainly waste it. That’s what most motorized vehicles do, including trains. Usually, the energy generated when you stop a moving vehicle is dissipated as heat, and is lost to the atmosphere. With GE’s ecomagination we’ve discovered that you can capture and store that energy, then reuse it – that’s how our hybrid systems work. Watch the video to see a simple illustration of the physics behind dynamic braking. Keep in mind an object’s force is measured in Newtons, using the equation “force = mass * acceleration.”

Objects are dropped on a blob-like substance at first. Energy is absorbed. Then objects are dropped without absorption with different results. Update: I suspect the creators behind the video didn’t have a complete understanding behind the math and mechanics, unfortunately, so it’s best to ignore the numbers and just watch stuff fall.

Is it bad that all I could think about was Andy Samberg throwing it on the ground?