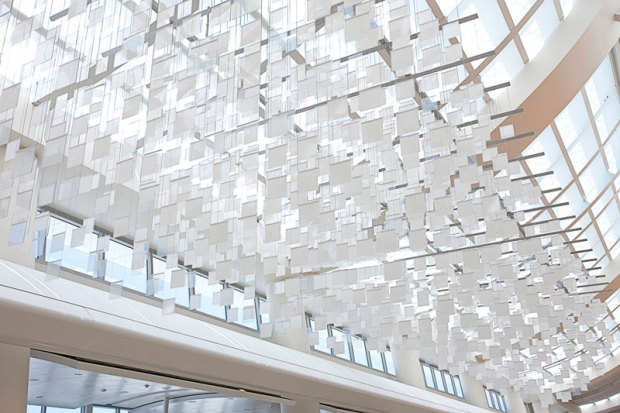 The eCLOUD is a dynamic sculpture inspired by the volume and behavior of an idealized cloud. Made from unique polycarbonate tiles that can fade between transparent and opaque states, its patterns are transformed periodically by real time weather from around the world.

When it’s raining, the eCLOUD appears to be dropping, while in a city that has hazy skies, the display feel slow and lazy. Stormy weather shows a busy cloud, bouncing around wildly.

Below is some footage of the piece in action.

There is also a display that accompanies the piece, which shows you the city that is currently up and its weather conditions. A smaller animation plays what’s going on above.

How is this done? Again, as the site explains, it comes down to the liquid crystal tech, which some manufacturers have used for windows and dressing rooms. Opaque in its resting state, but then clear when you add some electricity, demonstrated below.

Data feeds into the main machine, and then delivers directions via Processing (the software) and a hundred circuit boards (the hardware).

Very cool stuff. If anything, it sure beats the nappy carpet in Las Vegas’ airport.